Not everyone is Larry David- So Curb the Funny

by Stephanie Siegel / Monday, 11 April 2016 / Published in Be Memorable, Uncategorized

Picture a person you know who is moderately funny but isn’t ever going to be a comedian saying this:

That joke was written and performed by Jerry Seinfeld. Now if the person referenced above said that line doing a Jerry Seinfeld impression, you might find it funnier because you know the source of the humor and Jerry Seinfeld is universally funny. But without that backdrop, this line might be moderately humorous.

The truth is, according to one famous orator: “Only dumb people try to impress smart people. Smart people just do what they do.” That line is part of Chris Rock’s repertoire. Imagine how that would come across if James Earl Jones said it. If you are going for a joke, you better be able to deliver it like Chris Rock or it won’t be funny.

Humor is for the humorous. It does not mean it doesn’t have a place in broadcasting, in particular shows that are oriented around news, you just have to be careful to pick your spots. There is a reason why Will Ferrell playing the role of Anchorman Ron Burgundy works comedically. Will Ferrell is funny. The lines he is reading are planned, but he knows how to deliver them. And it doesn’t hurt that his fictional broadcasts are allowed to farsically exist. You’ll be writing out the majority of the lines you’ll be saying as well, only you aren’t Will Ferrell.

Humor also needs to feel natural. Broadcasts of all sorts will always consist of lighter fare, opportunities to be creative. These moments are precious and ripe for the ability to show range. Being funny when it is appropriate is a bridge to opportunity. Using humor at inoppertune times however or using humor without the ability of naturally being funny will harm your reputation.

Lets discuss humor at moments where it is risky to be funny. Any story with serious overtones, even if a humorous moment seems to present itself is a trap. There is a famous fight that occurred in a NBA playoff game between the Miami Heat and New York Knicks in 1998. Heat Center Alonzo Mourning was a bruising player, one of the most fierce big men in the game. Knicks forward Larry Johnson was a more versatile player, capable of getting locked up with the opposing big men in fights for rebounds but was also an expert mid range shooter with extended range. These two players were key members of their teams and blame would fall squarely on the player who was eliminated from the playoffs.

Late in the 4th quarter of game four of the Eastern Conference Quarterfinals, Johnson and Mourning got locked up awkwardly and instead of cleanly breaking away from one another, the frustration of the game and series turned into a flash fight. Two of the largest men in the NBA were throwing wild haymakers at one another. It was mayhem.

Jeff Van Gundy was the head coach of the Knicks that season. Van Gundy was the antithesis of what a successful coach looked like. He was listed generously at five feet nine inches and balding. He had major bags under his eyes as if he hadn’t slept in years which probably was true considering his reputation as one of the best prepared coaches in the league. And despite his look, the way the Knicks played for him was a sure fire sign that he was well respected. Van Gundy knew what this fight meant: potential suspension for his star player, or worse, injury. So Van Gundy did was came natural to him, he tried to stop it.

Mourning is legitimately seven feet tall. He was a solid rock of muscle. Johnson was chiseled, but he was also a mountain of a man easily capable of handling himself in this fight. Van Gundy couldn’t literally step between them. His head wouldn’t have reached the two players shoulders, so he did what apparently came naturally to him in this moment of crisis, he dove for Mourning’s legs and wrapped himself around one of them. Mourning continued to fight as if Van Gundy was a mosquito. That video is priceless. It features a small balding white man in a suit draped around the calf of one of the largest athletes on the planet.

Now the story has serious ramifications with an undeniable humor element. This is dicey for the broadcaster. The one who can meld a humorous line naturally into the description of this play yet not lose sight of the ramifications of the moment succeeds. Now consider this moment just happened and isn’t something that you’ve had the chance to review over and over where you come up with what you hope is the perfect line, are you prepared for a moment like this? This is where you need to know yourself. Am I naturally funny enough to trust my own instincts here and take a shot that might be memorable or am I better served acknowledging the humor in it and staying focused on the real matter at hand, an NBA fight that could reshape the playoff picture.

Catch phrases became the rage at ESPN for a long period of time. Chris Berman’s “Rumblin Stumblin Bumblin” or Stuart Scott’s “Cooler then the other side of the pillow” are famous examples. They have a place and if used appropriately (not every highlight or very often for that matter) can be effective and help brand you. Poorly timed catch phrases will make you sound like you are trying way too hard or worse, trying to be someone you aren’t. Integrity and originality is a key for a successful broadcaster. There is a balance to using these tricks of the trade, the key is figuring out if this helps you or hurts your brand.

If you want to incorporate humor, you can do so in your writing.  Later this week I’ll discuss ways to execute this. You can always email me with questions or comments, Bram@reelmediagroup.tv. 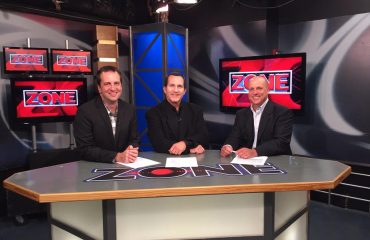 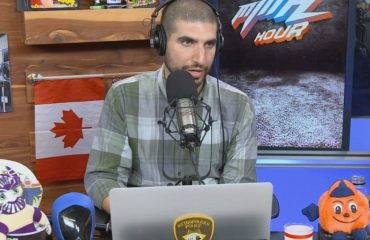